Why Small-Batch Rugs are Better for You In Singapore, Small-Batch Rugs and Textiles Made by Craftspeople From Around the World

When former banker Denise Kaur set up her new home with her newly wedded husband, she was in a purgatory state of mind. Fresh from unshackling herself from a taxing corporate way of life, Kaur wiped her slate clean. Mindfulness, once a distant concept to her, was something she wanted to incorporate into her lifestyle — including in how she would decorate her house. That meant filling her home with homeware that wasn’t merely pleasing for the eyes, but also came with “a lot of soul or story to it,” as Kaur puts it.

What started as a self-reinventing sojourn ballooned into a much larger project. In 2015, Living DNA came to life. Its showroom, now headquartered in the industrial hub of Tampines, is a sunlit haven for homeware pieces — from woven rugs to ceramicware — that Kaur sourced from different parts of the world.

“In the beginning, we worked with Indian craftspeople,” recalls the 31-year-old. “These craftspeople tend to have a long-standing relationship with other craftspeople in the country.” Kaur attended trade fairs, and whenever she travels, she makes it a point to chat up locals, learning more about their indigenous crafts. Her network grew, and soon enough, she established a constellation of artisans in the Himalayas, Morocco and Turkey among others, who hand-weave rugs, cushion covers, table runners in limited batches to dispatch to Living DNA.

“If you go to Mongolia, you’ll see that the rugs there will have clouds and the wide-open grasslands,” says Kaur. “The origin of the home rug was rooted in its function to warm the floors, the walls. But other than function, people have instilled their culture into it, too.” These cultural narratives, closely tangled with and distilled in each strand of yarn, pegged Kaur’s fixation with the supposedly humble rug.

Kaur would select pieces she gravitates towards, scouring warehouses from three in the morning. It’s only when she feels a solid form of connection with the artisans that she would cautiously proceed — ensuring fair wage and good working conditions — to develop the relationship further and collaborate with them on customised orders. “We stick to the way and materials these traditional weavers would use to make them, but at the same time, we always have in mind of the modern homes [the rugs would end up in],” she explains. For instance, in Kashmir, a mountainous region that borders the Himalayas, Kaur works with a group of craftswomen. Their native textile features bright and elaborate embroideries. “Instead of ordering directly what they would make, I would provide a cover inspiration, which would result in patterns that are less ornate yet still very much intact with their roots.”

Each textile design would typically be reserved for three to six pieces per size to cater to various sizes of the modern home. Bespoke rugs are available upon request, although they “would be done in the ancient way of making a rug,” says Kaur, emphasising the varied length of time required. “Everything would be made from scratch. The wool will be sourced [to match one’s need], the yarns will be dyed, sun-dried and weaved into a singular rug.” Through these rugs, Kaur sees herself dispersing these untold stories of almost-forgotten crafts into people’s homes. After all, in this digitally charged time, a snug reminder of what the human hand is capable of should be more than welcomed.

We love our rug! Great quality and finish (and so soft :) ! We used the trial service in our home, it was so useful to make a decision ! The team and the service is really top notch! Highly recommended!

Even my cat loves the rug... 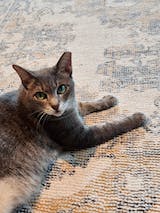 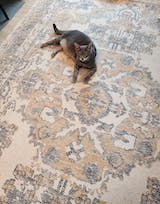 Great rug, fuss free and easy to maintain. My kids love to play on it too with the shapes and colors to their imagination. Am really appreciative of the trial service as well, as I can avoid multiple mistake rug purchases in terms of design and size. Thank you LivingDNA 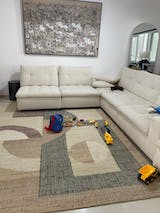 My husband and I recently moved into our new home and we got three rugs from Living DNA. The entire process was smooth and enjoyable. Living DNA has an amazing and very useful home trial service - we could select the rugs we wanted to try and Living DNA would arrange for the rugs to be transported to our home so that we could visualise and see how the actual rug looks in our home!! We were assisted by Dana - who is absolutely responsive, fast and very helpful. We loved how our rugs turned out! :) 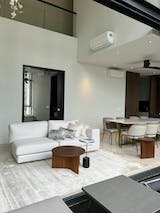 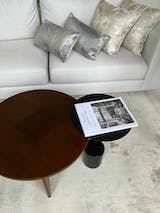 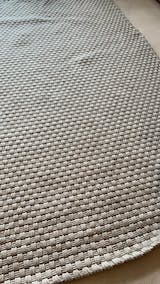